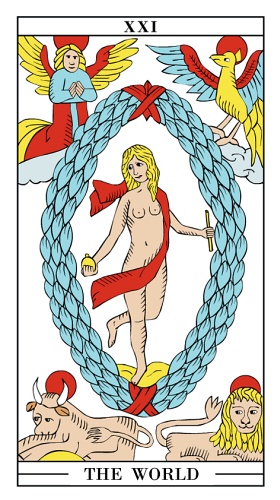 The World card portrays a naked woman in the middle of the festive wreath. She is holding a magic wand in the left hand and a bottle with a mysterious essence in the right. The wand is the evidence of her power and the bottle reminds the strength of her knowledge. She is surrounded by the four evangelists, who have a halo over the head. The World is the culmination of intensive efforts and reminds of the fulfillment of the long journey. The arrival of the desired goal.

The center of the card is important. It shows what really is required. Thus the woman in the middle can impersonate any of your inner goals. It may be an allied soul whom you have been awaiting and who is now opening her arms to you.

Thanks to her nudity she can be a symbol of successful discovery and solution of a problem. Her scarf suggests that she can be a muse, a thought or an idea, which has finally reached the realization.

The World can be obviously a real woman, girlfriend or wife - pointing to a happy relationship or bond. Any thoughts you might have looking at this card will certainly be important. Think about which of your strenuous efforts can now be completed and bring fulfillment to you.

You often have to be patient when waiting for a result. The completion is never faster the actual work. Thus this card warns you to avoid disappointment and failure. In an unfavorable position, this card may sign the futility of your efforts. The question in this case is, whether to blame your attempts to take actions too quickly or if somebody else is spoiling your plans.

The World does not only mean the completion and closure of some issues. It is also a new beginning. It is important to keep in mind that obtaining new knowledge is necessary and that this journey continues forever. If the card was a symbol of marriage to you, then subsequent married life is also something new. If it was a symbol of a task completion, there will surely come another new project or contract.

The World also symbolizes that the real and lasting value, which should be your goal, is the wisdom. The wreath encircling the World is a proof of integrity, which is also brought by the wisdom. A wise man understands the world in many contexts which fit together as individual leaves of the great wreath. It crowns the human life and gives a real value to it. The word Wisdom in Greek is "Sophia". The philosopher is then translated as "the one, who loves wisdom" (filein - love, Sophie - wisdom). Perhaps the woman on the card is Sophia (wisdom), who is now shown to you in all her glory. Try to love her and to learn more about her. Become a philosopher. Thanks to wisdom you will solve many unanswered questions and your life will get a resolved solid character.