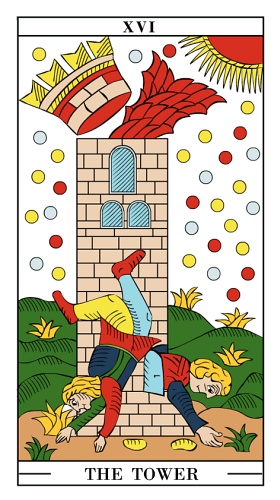 The Tower shows a high building which is engulfed in fire. The roof flew off the walls by the destructive power of the flames. The Tower is a symbol of magnificent building work, but it is ruined due to the greed or pride of its builders. The characters pictured on the card perhaps wanted to get up to the sky, just because of their pure curiosity. Or maybe they were driven by their own vanity and desire to overcome their neighbors. Their best efforts became futile and the work is destroyed.

The Tower can be perceived as material wealth which can be piled up in huge amounts. Anyone, who does so without an appropriate limit, takes the risk of an eventual break down of his Tower. The one who has no Tower, has nothing to lose. He does not have to worry it could be destroyed by fire, wind, or that his wealth will gradually decay over time. But only few people will start their journey to asceticism and give up the wealth which our world has to offer.

On the contrary, the wealth represented by the Tower is primarily an example of endurance and determination to build something spectacular. A tower cannot be built overnight. Thus this card will encourage you, if you work on a large project, for example reconstructing a flat or starting a new period of life. The Tower gives the motivation for your plans.

The Tower rises up from the distance and thus makes it clear, that someone powerful dwells in it. At the same time to those who inhabit it, it provides a rare view into the landscape. This way the Tower can serve as a good mean to rise above everyday problems and to get a real world view.

The characters falling off the tower should only be taken as a warning. The card brings the message that no facilities might survive forever. And if the building (or trying to create something in your life) is driven by profit-seeking motives only, the result is often poor and rather unstable. Therefore, if you do some work only with regard to your benefit, the result itself will certainly not be good. Such "Tower" would soon collapse.

The message of the card is clear: Build and enjoy fruits of your work. Just be careful - the Tower, which reaches beyond your capabilities or limits is likely to break down with you. Stop looking for your luck in the clouds and stand rather firmly on the ground. Just like your Tower. Think about how many people you know, who overestimated their own strength or capital and built a company or a house making huge debts, which finally tore their dream down. There is never too much contemplation, and often there is no need to rush.

And if you feel like your tower just fell down, do not despair. Thanks to this experience, you will now be able to estimate much better. The Tower can be a new base or support for everyone. And each new Tower you will metaphorically build in your life, should be stronger than the previous one. Whether it will be superior to your surrounding does not matter at all. It is important that you will be happy with it.