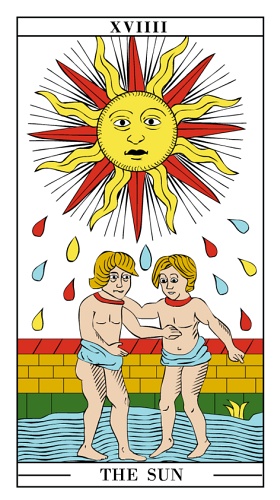 The Sun is looking directly at us. Its yellow rays are literally dancing in the amount of energy. The red ones are burning as a hot sword. Colorful drops are directed away from the Sun and they are also expressing the springing energy of which the Sun has an excessive amount.

This card brings you motivation and determination. It is not only important to start an activity, but also to have enough strength to persevere in the efforts for weeks or even months. Now the Sun may indicate, that the time to embark on large projects has come, because you will have enough energy to give out. Alternatively, there might appear a "workhorse" in your vicinity that can motivate you to the increased work effort.

Two scantily clad figures in the bottom of the card resemble either a fighting match or the efforts to help each other. Both men are balancing on water. Walking on water surface has long been considered a miracle. Thus the card shows that nothing is impossible under the direct influence of the Sun.

It is not clear, however, if the characters are trying to get each other off the balance or on the contrary to support each other. In the first case it is rivalry, in the second cooperation. Consider which one you now experience more in your life.

The energy brought by the Sun may easily turn into your disadvantage. There might appear a powerful rival at work or in your life who would make you concerned. Fear and anxiety may also come in case you wrongly estimate your possibilities and rush into a big project, that will get out of your control.

Keep in mind, that water underneath the male characters feet only shows uncertainty that always accompanies situations, where a lot of energy or capital is in the game.

Remember also the poetic dimension carried by the Sun itself. Lay down on a warm place or stand for a few minutes near the window, close your eyes and let the soothing rays penetrate your skin and body. This may be a sufficient reward after an exhausting day.

And if it is cloudy and you cannot see the Sun in the sky, in your neighborhood or in your heart, do not despair. This card is the promise of better tomorrows. Even behind the dark overcast, where clouds are impenetrable, the Sun shines. Just think hard about it and you can build a bridge from your patience, which will eventually lead you to the Sun.