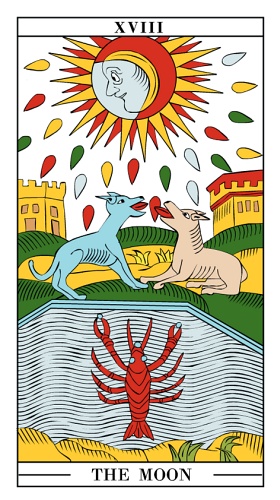 The Moon is turned to us from a side view. It does not speak directly to us. It also seems, as if the Sun with its rays was hiding behind it. The reason is simple. The Moon is really some kind of a mirror of the Sun. Its light which can be seen at night is just a reflection of sunlight.

Once upon a time the Moon was alive. Today it is just a cold stone. Its face does not change over millions of years. It is not a source of energy like the sun. It only receives and reflects the rays that arrive to it. Therefore it is primarily a symbol of passivity. Everything, what we see now on the surface, is a matter of a distant past.

The Moon is a guide. It does not offer you a helping hand. It is too far away and it floats on its way through the night sky. You can think about old times and study the secrets behind its wrinkled face. With the Moon you will get the inspiration and space for contemplation in places surrounded by darkness.

In a relationship the Moon always embodies the less active one, that lets its counterpart shine on it. The one who likes to be lead and persuaded. Or someone who uses the energy of others to live in their glow. The Moon reminds us of somebody or some period that will be passive. It may be someone close, from whom you have hoped to get strength, but who is passive now. However, the Moon may as well indicate that now the time is coming when you should reduce the activity and slow down. The night, where the Moon rules, is the time of sleep and dreams.

Besides the the Moon, the card is dominated by two dogs and a crayfish. They together express different possibilities how to develop the passive character of the Moon. Just as we are far from the Moon and its cold isolation on the celestial path, we are very distant to the nature of dogs and crayfish. These are animals that can live independently and do not need people in their life.

The dogs, however, can be mastered. Thus they reflect the possibility, that passive people can sometimes be manipulated. That they literally can be "trained" or "tamed". Consider whether you are cannot observe signs of such behavior in yourself or in your neighborhood. The Moon in the form of dogs becomes completely dependent on its counterpart. Without the sun, it would be utterly lost.

The crayfish on the other hand, depicted in the lowest part, represents the incapability of any relationship and influence. The crayfish is destined by nature to passivity towards man and prefers to live in seclusion at the bottom of a large pool. It embodies those people, who find their wealth (pearls that the crayfish is clutching) within their own solitude (in a shell).