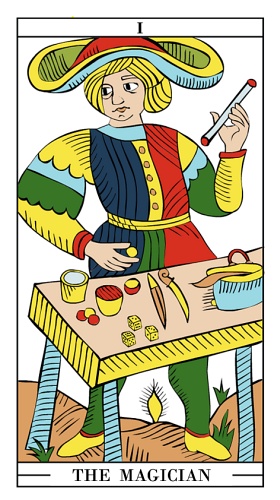 The Magician is very skillful. He can amuse and entertain. He is very smart, attracts attention, and is a born entertainer. He does not let anyone fool him, because he knows a lot of tricks himself. However, he had to develop his talent for a long time, because without endurance and exercise he would have remained only a gifted disciple and would not have reached the mastery.

The Magician is primarily a symbol of skillful communication. This card gives you courage, strength and confidence in any serious conversation. With the Magician, you will easily manage complex family disputes, difficult business meetings, job interviews, unpleasant phone calls, or warranty complaint for broken-down iron.

This card will also equip you with sense of humor and readiness even in casual conversation. This way the Magician will be your perfect assistant at social events of all kind. You can become the star of a party, gain the admiration of your colleagues, or just make a news vendor laugh. You will choose the right words at the right time with this card. Such talent is very useful whenever you want to attract the attention of your counterpart, whether during an ordinary encounter at the work's coffee machine or at a long romantic dinner.

If you plan to pursue activities, that require a bright mind, than the Magician is a very good sign. Start learning a foreign language, play chess, study for an exam or read the manual to your mobile phone to find out which functions you have not yet utilized.

The Magician can also be anyone in your surrounding. Try to feel the positive magical moments you encounter. Does it seem that someone is more articulate than before? Does someone make a very charming impression on you? Maybe the Magician is behind that all. However, be cautious that someone does not try to fool you. The magical ability to be persuasive can also be nourished by malicious intentions. The dice on the table in front of the Magician can serve as and example. They can be a source of entertainment, but if you surrender to their magical spell, they become easily a symbol of gambling and hazard.

The risks of this card are mainly overestimation and failure. The Magician is definitely not omnipotent and you should not completely surrender to his charm. You would certainly fail to study the entire Encyclopedia Britannica in one night. Likewise, if you have been very shy till now, even the Magician will not help you to cope with three dates in one evening. And after six glasses of wine, not only the Magician's tongue would be exhausted, but yours will be obviously too. Therefore do not fall into self-delusion and judge your skills rather modestly.

The Magician gives a wise direction in which to step out. Try to use and develop all his aspects, which will increase your attractiveness and charm and which will help you to better express your thoughts and feelings. The Magician is only a step by step guide on your path to continual improvement.