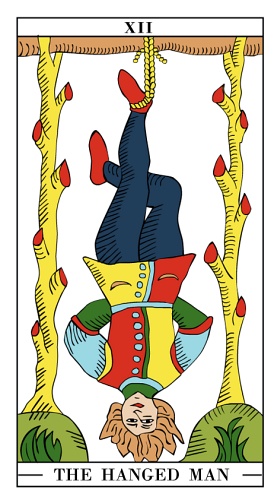 The Hanged Man man is hung by one leg on the rope. The question is, why does he persist in this unusual and apparently uncomfortable position? As a matter of fact, there are two explanations.

It may be someone, who deserves the punishment, and therefore he was tied to the gibbet. At this point, he has to suffer and carry the consequences of his actions. However, it is clear that his wrongdoing could not be too serious. Otherwise, the punishment would have been significantly more severe.

So here we have someone opinionated, probably a rebel going against social conventions. Thus the Hanged Man is a good way to challenge the society and traditions. The Hanged Man is the one, who does not only think differently but he also acts so. If he would keep his opinions to himself, he would not be punished by the major society.

The Hanged Man may be an environmentalist, a campaigner for disarmament or another political activist. As well, he can be someone who refuses to take care of his health, career or bank account. Just anyone who does not share all the commonly accepted views and has the courage to step out against the mainstream conventions. In retribution he loses his freedom temporarily.

If you feel that the Hanged Man is part of your nature, accept it as a challenge to consider how to combine your dealing with the outside world. For example, think about the last time you had troubles with an authority or an institution and how would you behave in the same situation next time. If you perceive someone of your friends as the Hanged Man, think about how to help him in his troubles. Certainly you will not change his views, but maybe you could find a better way to express them while avoiding social retribution.

However, there is a second way, how to look at this card. The Hanged Man has a rope attached only to one leg and his hands are hidden behind his back. We do not know, whether they are bound or not. And if they are not, we can think with a little exaggeration, that the Hanged Man is just practicing on a rope, or maybe stretching his back. He remains in this unusual position, because it brings him relief, pleasure and especially the inverse view of the world.

The world upside down – to see things from another perspective, that is what attracts the "voluntarily" Hanged Man. Inverted World is a valuable source of inspiration to him. This Hanged Man is an artist, an inventor or a visionary.

No matter what impression this card makes on you, its message should be always accompanied by the fact, that the Hanged Man is for that moment someone with a limited potential. Someone, who – voluntarily or not – has lost his power for some period of the time. He must now sacrifice his comfort. Only his own skills or waiting will bring him to his natural position. Hanging is the tax for his free spirit and innovative ideas.