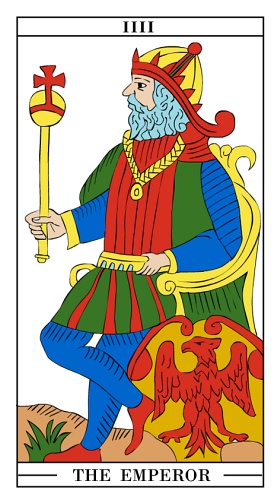 The Emperor is a powerful ruler. He represents a father figure who should give a good example to us. He embodies the authority who has to solve many important decisions. Therefore the Emperor has to be strong and determined, to be able to solve the problems and take important actions.

Professionalism is an essential quality of the Emperor. He does not act recklessly, always thinks over his actions and focuses on doing his job responsibly. Be inspired by him. Consider for instance, if there is any new book in your field that you could study. Ask yourself the important question whether your work means also the life mission to you, or if it is just a necessity. The Emperor knows that work done only for money does not bring real life fulfillment. And even if there are periods in life when you cannot choose the work according to your wishes, there certainly will come a day when you will have a job that will fulfill not only you, but also those who will harvest the fruits of your efforts.

Try to look into the future like the Emperor. Try to invent something new, something that will make your or others' life and work easier and more pleasant. Do not settle just for the idea. Sacrifice a few lazy evenings in front of television and lock yourself in the workshop; or submit an application for a grant. Your ideas require commitment to follow through. Only those you have carried out are truly valuable.

The Emperor is mighty and he influences wide surrounding. The Emperor tries to lead the others, because he is endowed with exemplary character and responsibility. He is ready to deal with serious issues. Should you spend your salary bonus on a nice holiday or rather save the money for the reconstruction of your apartment? Should you work or study abroad or rather stay with your family and friends here? Will it be better to buy expensive toys for children now or to save money for them to study when they grow older? You have to answer these and similar questions for yourself. Whatever is on your mind, the Emperor will be a good guide in your decision making. Try to decide responsibly as he would do.

The Emperor can be determined when needed. There are moments, when it is not possible to take a long time to consider our actions. The Emperor does not act rashly but resolutely. And always according to noble moral principles. For example, if you see a pickpocket on the street, you do not have to directly grab his hand. Also to call the police is a way, how to actively help in the situation. And it is certainly better than idle watching.

This card does not necessarily indicate the Emperor inside you. Think about someone in your neighborhood who is now a typical Emperor. It may be your superior, a colleague, your partner or even a customer. What is his attitude towards you? It may be friendly. However, if anyone enjoys the power itself it is usually not far from arrogance or real conflict. In your decision-making always consider the interests of the others and not only of yourself.

Whatever life and work tasks you have to solve, try to accomplish them with courage and responsibility, like a real Emperor would do. You may not be a manager of a software company, nor a car factory CEO. To lead your own life with bravery and honesty, that is today truly a commendable act for everyone.